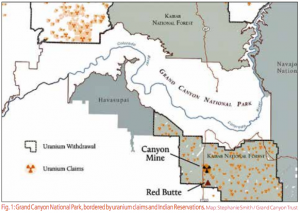 Grand Canyon National Park has been inscribed as a World Heritage site in 1979, under criterions viii, ix and x of the UNESCO: „The Grand Canyon is among the earth’s greatest on-going geological spectacles. Its vastness is stunning, and the evidence it reveals about the earth’s history is invaluable. The 1.5-kilometer (0.9 mile) deep gorge ranges in width from 500 m to 30 km (0.3 mile to 18.6 miles). It twists and turns 445 km (276.5 miles) and was formed during 6 million years of geologic activity and erosion by the Colorado River on the upraised earth’s crust. (...) Horizontal strata exposed in the canyon retrace geological history over 2 billion years and represent the four major geologic eras.“ „There are also prehistoric traces of human adaptation to a particularly harsh environment.“ [1]

„Over 2,000 prehistoric Indian ruins have been recorded in the park. (...) The ruins contain evidence that the earliest human inhabitants of the canyon were gatherers and hunters. (...) ... discovery of split-twig figurines ... Radioacarbon dating has shown some of the figurines to be 4,000 years old.“ [2]

Since the 1950s, uranium mining had been a major operation in the Southwest US, leaving a legacy of unreclaimed uranium mines, mills, tailings and tailings ponds, some of them currently under reclamation.

Although the mine site is not on the World Heritage site territory, there is major risk that radioactive contamination may reach the WHS

or via a groundwater aquifer (Redwall Muav aquifer) which extends from the mine area towards Havasu Canyon; the area is ‘karst’, and groundwater movement is not very well understood.

According to a USGS study of 2016 [4], groundwater discharges into Havasu Creek; this groundwater may get contaminated by uranium mining of a geological formation called “breccia pipes”, as in the Canyon Mine - and then reach Havasu Creek and finally the Grand Canyon. The Havasupai Tribe, a recognized Indian tribe inhabiting the Havasu Canyon, had opposed the development of the mine for this reason.

The Canyon Mine project came to a halt in 1991 due to a decline of the price of uranium. To this point in time, no uranium ore had been mined. The company, Energy Fuels Nuclear went bankrupt later on. Ownership of the mine changed repeatedly until Canyon Mine ended up with Energy Fuels Inc., founded in 2006 (with no connections except for the similarity of name, to former Energy Fuels Nuclear). A sudden rise of the spot market price of uranium in 2007/2008 had sparked new interest in uranium mining.

In 2012, under Obama administration, Secretary of State Ken Salazar withdrew an area around Grand Canyon for 20 years from all new uranium developments (“withdrawal” or, colloquially called ‘ban’) which was welcomed by the UNESCO WHC [WHC Decision 40 COM 7B.104]. The uranium ban, however, does not apply to pre-existing mines and claims such as Canyon Mine as well as several mines on standby and to claims; these mines might commence production at short notice once the price of uranium rises. In 2016, activities at Canyon Mine were restarted, until in Mach 2017, an ‘unexpected influx of water’ brought sinking of the shaft to another halt.

The UNESCO WHC opinion and 2016 Decision UNESCO WHC expressed in 2016 serious concerns, stating, among other issues: „It should be noted in particular that the EIA for the Canyon Mine project, which was temporarily closed in 2013, dates back to 1986. It is therefore crucial that a new EIA, including an assessment of the potential impact on the OUV, is conducted before operation of this project is permitted to resume. [WHC/16/40.COM/7B.Add, underline not in the original text]

The UNESCO WHC opinion and 2016 Decision

UNESCO WHC expressed in 2016 serious concerns, stating, among other issues: „It should be noted in particular that the EIA for the Canyon Mine project, which was temporarily closed in 2013, dates back to 1986. It is therefore crucial that a new EIA, including an assessment of the potential impact on the OUV, is conducted before operation of this project is permitted to resume. [WHC/16/40.COM/7B.Add, underline not in the original text]

No action of the State Party are known implementing this request. The WHC’s Decision and recommendations were not taken into account.

In December 2017, the Court of Appeals decided that the 1986 EIA – by then, 31 year old – was good enough to proceed with uranium mining in 2018, rejecting a complaint by the Havasupai Tribe, the Grand Canyon Trust, the Center for Biological Diversity and the Sierra Club, basically on technical-legal reasons. [5]

In addition, more uranium mines in the area pose a danger to World Herirage Site Grand Canyon; in items no. 4 and 5 of the 2016 decision, the WHC ... „Notes with significant concern that there are 11 consented uranium mining proposals in the area surrounding the property that are exempt from the 20-year withdrawal” and “Reiterates its position that mineral exploration or exploitation is incompatible with World Heritage status ...”. No action by the State Party is known concerning other mining projects and uranium claims in the area of the World Heritage site or affecting it.

The Ban, the Companies, US National Security and Latest Developments

The Court of Appeals – although giving Canyon Mine a green light – upheld in its December 2017 decision the ban for new uranium mining projects in the “withdrawal zone”. However, in mid-January 2018, Energy Fuels and Ur-Energy filed a petition, claiming “Our country cannot afford to depend on foreign sources – particularly Russia, and those in its sphere of influence, and China – for the element that provides the backbone of our nuclear deterrent, powers the ships and submarines of America’s nuclear Navy, and supplies 20% of the nation’s electricity.” [6]

The companies allege that US dependency on uranium imports from abroad would jeopardize National Security. They would like to have “25 percent of the U.S. market [reserved] for domestic uranium” – which then would be mined by US companies. This rather unprecedented move – if accepted by the administration – would grant US uranium companies a 25% market share; companies would then not need to compete with foreign companies – which might artificially spark a new uranium boom in the US – and put the Grand Canyon World Heritage site at additional risk.

Moreover, companies push hard to overthrow the uranium ban: In mid-March 2018, “two groups – the American Exploration and Mining Association (AEMA) and the National Mining Association – have submitted a new request to the Supreme Court, asking them to review the mining ban, enacted in 2012, that bans all uranium mining claims on the lands surrounding the national monument.” [7]

The (uranium) mining industry is aggressively pushing forward to mine uranium in close vicinity of the Grand Canyon, potentially affecting the World Heritage Site. The State Party is neither taking WHC concerns serious nor implementing any of the WHC 2016 Decision’s recommendations.

Uranium exploitation bears the risk to deprive the Havasupai Tribe of one their basic means of existence - water. This would amount to an infringement of their rights under the UN Declaration of the Rights of Indigenous Peoples and / or to a violation of the UN Covenant on Economic, Social and Cultural Rights.

At a hearing of the House Committee on Natural Resources, Havasupai Tribal Council member Carletta Tilousi testified on Dec. 12. 2017:

“The Havasupai People are very concerned about our main fresh water source, Havasu Creek, which flows right through the middle of our village. Havasu Creek is created by the Red Wall Mauve Aquifer, which supplies water for us and downstream cities towns like Kingman, Phoenix, Tucson, and Las Vegas. The largest uranium ore deposits in the United States are all located above the Red Wall Mauve Aquifer; therefore, the cancellation of the Withdrawal will open up the uranium ore located on Kaibab Forest Service Lands to uranium companies.

The spring water flows directly from the Red Wall Mauve Aquifer that lies directly beneath the plateau and peaks south of Grand Canyon. Opening up this area to uranium and other mining would be tragic and an environmental nightmare. What happens to that Red Wall Muave Aquifer and springs happens to the Havasupai People. I am here to tell you that uranium contamination in the aquifer will not only poison my family, my Tribe, ancestral lands, and me, but also millions of people living downstream.

The Tribe has great reason to be concerned. Thousands of uranium mining claims, like so many vials of poison, threaten those lands that are the source of our water. Scientists do not yet fully understand how mining uranium will affect the groundwaters and watershed.” [9]

The Navajo Hopi Observer reports that the ban on uranium mining on 1 million acres of public land near Grand Canyon will be kept in place. Judge David Campbell rejected all claims to the contrary made by uranium mining firms on his decision on March 20th. The moratorium was put up in January 2012, to…

In the ongoing issue of a potential lift of the uranium ban in South Virginia, religious leaders from the area came together to speak out against uranium mining in Pittsylvania County.

If You Love This Planet – Last podcast

After four-and-half-years and 197 programs, If You Love This Planet ended with the broadcast of its last new episode on the week ending December 28, 2012.

Salazar’s decision to halt new uranium claims would be consistent with permanent bans by Hualapai, Havasupai and Navajo nations on their lands that surround the park….mining is a minor part of northern Arizona’s economy (unlike tourism at the Grand Canyon) Uranium mining would hurt Grand Canyon area, The Arizona Republic, Tom Chabin,  28 Feb 2011,…

Havasupai Warned: Uranium Mining in Grand Canyon   Posted by Brenda Norrell – March 16, 2011 at 9:36 pm   By Brenda Norrell   SUPAI TERRITORY (Grand Canyon) — When the Supai opposed uranium mining in the Havasupai homeland, Supai said it is a place of prayer for the well-being of the world. Protection of this sacred…

Navajo Group to Take Uranium Mine Challenge to Human Rights Commission   By APRIL REESE of  Greenwire Published: May 12, 2011 In a last attempt to deep-six a controversial project to mine uranium near two Navajo communities in northwestern New Mexico, a Navajo environmentalgroup is taking its fight to the global stage. Tomorrow, Eastern Navajo…

Help us make sure this temporary action becomes a permanent ban   … Secretary Salazar urged the Administration to adopt Earthworks’ recommendation of a more permanent, full one million acre withdrawal. The land surrounding the national park is now protected until December while the Administration works on a more comprehensive solution.   Support Earthworks! This…