On the occasion of the conference of the International Atomic Energy Agency (IAEA) in Vienna, which begins today and will discuss the role of nuclear energy in limiting climate change, the Alliance Don’t nuke the climate, consisting of international anti-nuclear organizations, is organizing a counter-conference. 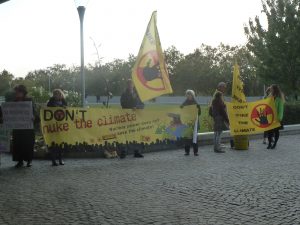 Reuters recently reported that nuclear energy is both too slow and too expensive to present a meaningful response to the climate catastrophe facing our planet. Already today, the installed capacity of all renewable power plants worldwide is six times greater (2,351 GW) than that of all nuclear power plants (398 GW).

But why does the IAEA demand that countries such as Great Britain, France, the USA, Russia and China continue to invest in nuclear power?

“Nuclear power powers the bomb. Without a “robust” civilian nuclear industry and the associated nuclear infrastructure, nuclear weapons programs would not be possible due to the high costs, risks and need for trained personnel,” says Dr. Angelika Claussen, European Chairman of the Physicians for the Prevention of Nuclear War (IPPNW). Instead of providing subsidies for the nuclear weapon states and their nuclear infrastructure, the IAEA should urge the nuclear weapon states to sign the Nuclear Ban Treaty (TPNW).

“Nuclear energy depends on the raw material uranium”, says Makoma Lekalakala from South Africa, winner of the Goldmann Environmental Award. “Uranium extraction and the construction of nuclear power plants often violate fundamental human rights, especially the rights of indigenous peoples and communities. My continent Africa and its people have suffered enough from the health consequences of uranium mining. For instance the workers at the Shinkolobwe mine in Congo, who dug uranium for the atomic bombs in Hiroshima and Nagasaki or the workers and people of Niger who sacrificed their health for the French nuclear industry. In South Africa, too, the population was poisoned and contaminated by uranium mining, the toxic and radioactive legacies of uranium mining.

Günter Hermeyer, German representative of the anti-nuclear alliance “Don’t nuke the climate”, sees in the “assistance for deploying safe secure and safeguarded nuclear technologies” disseminated by the IAEA the danger that countries of the global South will accept the same mistakes as the industrialized countries did decades ago.

“Now, in the global climate crisis, where millions of young people around the world are on strike for the climate, fundamental new and sustainable solutions are needed, and no further dissemination of outdated and dangerous technology. We can only achieve this by switching to renewable energy worldwide.”

“This of course also applies to Europe,” adds Dr. Angelika Claussen, IPPNW Vice-President of Europe. “The decision of the EU Council of Ministers not to exclude nuclear energy projects from the granting of subsidies for sustainable financing is completely unacceptable”.