“Uranium Mining – what are we talking about?”

Introduction to the Booklet 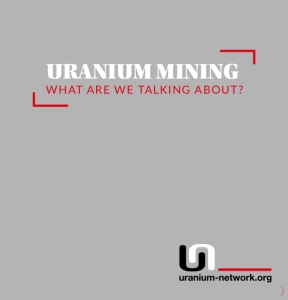 Big uranium companies as well as ‘junior’ miners started to explore for uranium all over the world, hoping for major profits to be made; the new rush for uranium had much in common with the gold rush of former times – with exaggerated prospects to attract investors’ monies.

Africa quickly became one of the targets for uranium exploitation. But why?

“Australia and Canada have become overly sophisticated. They measure progress in other aspects than economic development, and rightly so, but I think there has been a sort of overcompensa- tion in terms of thinking about environmental issues, social issues, way beyond what is necessary to achieve good practice.” (SOURCE: John Borshoff’s statement at the Joint Standing Committee on Foreign Affairs, Defence and Trade Reference: Australia’s relationship with the countries of Africa, Thursday, 6 May 2010, Melbourne)

Borshoff only expressed along which lines many companies were thinking and acting: There would be fewer concerns about environmental regulations and in regard to social issues in Africa than in most other parts of the world. Consequently, his company PALADIN went to Africa – Malawi and Namibia – to exploit uranium – and many others did so, too. Within a short time, in nearly each and every country in Africa, companies were searching for uranium.

They met a population for the most part completely unaware of what uranium is, let alone its uses or the impacts of mining it. Only a few countries had experience of the mining of uranium: CONGO (in Shinkolobwe, uranium had been mined since the 1940s), GABON (France’s state-owned nuclear companies had mined U since 1960), NIGER (France’s state-owned nuclear companies had mined U since 1971), NAMIBIA (Rio Tinto had mined uranium there since 1976) and SOUTH AFRICA (Uranium had been mined, initially unintentionally as a by-product of gold mining. From 1952 U was mined for its ownsake).

The general public in the vast majority of African countries had no experience or knowledge about uranium, its exploitation and impacts, making it easy for interested companies to veil their intentions when searching for uranium. Governments emphasized the jobs which would be created, the taxes and royalties for the state rather than the risks and dangers associated with uranium exploitation.

uranium-network.org together with IPPNW – International Physicians for the Prevention of Nuclear War, Switzerland and Germany, with financial and logistical support from the Rosa-Luxemburg-Foundation, Germany, and in cooperation with national and local grassroots NGOs, organized three major conferences on the issue of uranium mining and its impacts on health and the environment (Bamako/Mali 2012, Dodoma and Dar es Salaam/Tanzania 2014, Johannesburg/South Africa 2015) in order to inform and educate a wider public in the said coun- tries about the realities around uranium exploitation. Ongoing activities with national and local NGOs concerned with environment, health, human rights and social issues complemented the conferences.

Some of the information from these conferences was passed on to a wider public by engaged film makers:

The films cover important issues and aspects in regard to uranium mining. Nevertheless, we felt some basic information on what uranium is all about, what its uses are, how it is exploited and processed, its place in the worldwide nuclear fuel chain, how uranium mining impacts health, the environment at large, and communities, what is the aftermath of mining, and how uranium mining impacts the economy should be compiled. Thus, we decided to put information on all these aspects into the film “Uranium Mining – what are we talking about?” and the accompanying booklet.

The film has been produced to inform people with little previous knowledge about uranium and nuclear issues. We had to walk a fine line between over-simplification and being “un-scientific” on the one hand and overstraining our audience with details and scientific terminology. Wherever possible, we abstained from using nuclear terminology, and we did not include any radiation measuring units in the film.

Such details can be found separately in the chapters of the accompanying brochure available on the internet. This pool of information will be updated as need arises and new relevant information surfaces.

Personally, my inspiration to try and explain complex and complicated facts and issues as simply as possible in words and pictures derives from 40 years’ experience in the struggle against nuclear power, and from the writings of Arjun Makhijani, Director of IEER (Institute for Energy and Environment) on the democratization of science.

Today, on both sides – that of the proponents of nuclear developments and those critical of, or opposed to, such developments – experts and scientists express contradictory state- ments, opinions and recommendations. People are basically asked to ‘believe’ one side or the other since the matter would be too complex, too complicated for a layperson to understand.

Makhijani says: “IEER's aim is to provide people with literature which has a quality equal to that in scientific journals, but which doesn't require you to go back to college to get a degree in science to understand it.” Source: IEER's Goals and the Democratization of Science, by Arjun Makhijani , in: Science for Demo- cratic Action, by IEER, Vol 1, No. 1, Winter 1992

With this film and accompanying booklet, we try to give as much information as possible in ways that are hopefully understandable to the layperson so that people can get a picture of what uranium mining and its consequences are all about so that they are less dependent on ‘experts’, company information and politicians. The film was produced on a small budget which did not allow much travel; much of the material used had been gathered by the team of ujuzi Media and by John Zedekiah Magafu of Dar es salaam Christian Communication Centre at the conferences mentioned above, as well as footage by a few other film makers. In addition, some of the photos came from individuals.

The WISE Uranium Project website was (and is) an indispensable source of information on many issues around uranium mining; much of the factual information as well as some graph- ics are taken from it.
THANK YOU.

A big thank you also to Dr. Angelika CLAUSSEN, Dr. Günter BAITSCH, both IPPNW Germany, and to Prof. Doug BRUGGE who contributed greatly to Chapter 11 Health Impacts. Sheila GORDON-SCHRÖDER edited the final text, and Sara LOPES created the layout.
THANKS for good cooperation – and your patience.

The music at the beginning and at the end of the film is the result of an intercultural cooperation between Hamburg-based Musicians Sophie Filip and Robert Cordes with massive Support from Tim Lucas, Joka Johannsen, Manuuh from Swahili Records and Goldie Crisps and Tanzania-based musicians Wakazi (rapper) and the vocal trio ‘The Harmonies’ .

We are grateful for the financial support of Aktion Selbstbesteuerung for making this possible.

Hatutaki – Wakazi feat. Sophie & the Harmonies “SAY NO TO URANIUM MINING in TANZANIA”

Golden Misabiko, from the DR Congo, is a human rights activist with ASADHO – Association Africaine pour les Droits de l’Homme, Katanga section. After exposing extrajudicial executions in DR Congo, he denounced a deal in 2009 between France represented by the then president
Nicolas Sarkozy and the then-CEO of AREVA, France’s state nuclear company, Anne Lauvergeon, and the Kabila Government. The purpose was to grant France/ AREVA the exclusive rights to mine uranium in the DRC. The deal was meant to be kept secret and was never raised in Parliament.
Golden Misabiko had to pay dearly for his activities: he was arrested, incarcerated and tortured; one of his colleagues died in a car accident under mysterious circumstances. Golden was released later in 2009. He left the country and lives as a refugee in South Africa and other African countries.

In 2014, Golden Misabiko was awarded the Nuclearfree Future Award,
in the category “Resistance” in Munich/Germany at the annual award ceremony.

URANIUM – WHAT IS IT?

URANIUM AND ARTIFICIAL NUCLEAR FISSION: THE USES OF URANIUM

‘SIDE EFFECTS’ OF URANIUM MINING

THE TAILINGS AND THE PROBLEMS AFTER MINING